Welcome back!  How was your weekend?  I'm still somewhat hobbled after all of the work in the garden, but it was worth it, because everything looks fantastic.  I'll just take a few more ibuprofen and admire the tulips for a while.  After that, it's off to the movies to check out The Avengers: Infinity War, because BDH and Little Buddha are tired of trying to avoid spoilers online.  First things first though, let's check out the day's headlines.  The guys made you some coffee (because they're the best), so help yourself to a nice medium DD, and let's clear out some Monday Clutter.

North Korea to Donald Trump:  You're blowing this.  You know something is wrong when Kim Jong Un is coming across as a more professional leader.

A new report says Donald Trump's aides hired an Israeli security firm to dig up dirt on some Obama aides who were instrumental in negotiating the Iran nuclear deal.  Trump can't come up with a legitimate policy reason to withdraw from the deal by the May 12 deadline, so he figured he'd look for reasons to attack those who negotiated the terms instead.  We'd also be willing to bet that he doesn't have the slightest understanding of how the whole thing works in the first place, but because the treaty was an Obama accomplishment, we know the Great Pumpkin is obsessed with destroying it.  The sitting occupant of the White House engaging in dirty tricks like this out of pure loathing  is beyond outrageous and shameful, and as we know, it's also standard operating procedure for Trump and his thugs.

U.S. Representative Michael Capuano (D-MA) and Boston City Councilor Ayanna Pressley had a face-to-face engagement at a racial justice event on Friday.  There isn't a huge difference between the two progressive officials when it comes to policy issues.  It seems like this congressional primary race will come down to the differences they bring in background and perspective, and which one is more helpful for the residents of the MA 7th district.

Nestle is paying Starbucks $7.5 billion for the right to sell the Seattle company's coffee.

The Boston Red Sox beat the Texas Rangers 6-1 on Sunday.  Chris Sale was in control of the game all afternoon, giving up the one run, to go with 12 strikeouts, over seven innings.  The tall lefty now has an ERA of 2.02 for the season. The Sox got a three-run home run from Sandy Leon (as well as a solo shot from J.D. Martinez.)  It was the first HR from a Sox catcher this year, and given that Leon is currently batting .154, the Sox couldn't afford to waste any offense from him. The one negative of the day was that Mookie Betts had to leave the game after being hit in the shoulder by a throw from Rangers first baseman Ronald Guzman who was trying to turn a double-play.  Boston has today off before they start a four-game series with the New York Yankees, and hopefully Betts will be ready to go on Tuesday.

We want to wish a belated congratulations to Albert Pujols, who joined the 3,000 hit club on Friday.  The Angels slugger also has 620 home runs, and with three years left on his contract, he's not done hitting his way to Cooperstown just yet.

The Boston Bruins are done for the season after losing 3-1 to the Tampa Bay Lightning yesterday.  The B's surpassed expectations all year, but in the end, they were beaten by a better team.

Now that the B's are out, we have to root for the Vegas Golden Knights to take the Stanley Cup, because the notion of an expansion team winning the championship in their first year of existence is fantastic.

Monty Python's Terry Gilliam has faced many, many...many obstacles on the way to making The Man Who Killed Don Quixote, but miracle of all miracles, the film is coming, and it looks wonderfully insane.  Plus, we're all over a chance to see Adam Driver in something besides another Star Wars movie:

John Oliver achieved something so great recently that he decided to end Last Week Tonight forever because it could never live up to this accomplishment.  We're pretty sure he was kidding, but to some extent, it would almost be better if he wasn't, because this would be one of the greatest reasons to end a TV show.  Make sure you read the story if you don't already know Oliver's new legacy, because it's impressive. 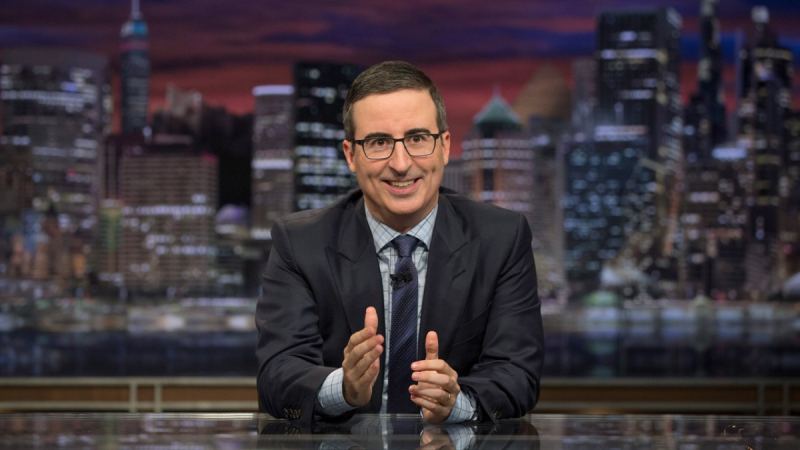 What's left for John Oliver to accomplish?  (pic via hbo.com)

Aerosmith made an appearance at the New Orleans Jazz & Heritage Festival on Saturday.  It sounds like the band is in fine form - it's too bad this is their only scheduled show for 2018.

Okay kids, that's going to do it for now.  Let's close things out with a tune we haven't heard in ages.  Here are the Lemonheads with, "It's a Shame About Ray," for today's, "Song of the Day."

Thanks for stopping by, everyone.  It was great to see you, as always.  Enjoy the rest of your day, be good, and we'll see you back here again for more fun soon.  (Maybe we can talk about Infinity War for a minute.)  Until next time, that's today's Clearing out the Clutter, and we are outta here.