There will always be a special place in my heart for Robin Williams.  I was in awe of the comedian when I was a kid.  The way his mind seemed to be working at 100 mph as the quips flew out of his mouth during his stand-up routines was spell-binding.  His movies could be hit-or-miss, but Good Morning Vietnam, The Fisher King, Dead Poets Society, and Good Will Hunting are some of my all-time favorites.  His suicide in 2014 was personally devastating, and the world hasn't seemed as funny ever since.  With that in mind, I couldn't wait to read Dave Itzkoff's new biography of the comic legend, simply titled: Robin.

Itzkoff tells the story of a shy son of a Ford Motor Company executive who played by himself for hours, with his imagination running wild, in the comfort of his attic.  Robin Williams seemed painfully lonely, and the deeper his loneliness, the stronger his desire to preform became as he grew older.  The Williams family moved frequently during Robin's childhood, which may have furthered exacerbated his struggle to connect with others.  In some ways, while he sought out people through his performances, he was still guarded, unable to fully open himself, which seemed to be a problem for his entire life.

Robin takes the reader on an extensive tour of the comedian's career and personal life.  We learn about his time at Juilliard and all of the jobs he had before fame arrived, including a stint on the Richard Pryor Show.  Williams clearly had a fertile mind, but it didn't pay off until the day the stars aligned and he signed on to play an alien named "Mork" on Happy Days.  Even then, a spin-off wasn't a given, but once the decision was made to go forward with Mork and Mindy, Williams was on a course for stardom.

Dave Itzkoff goes into great detail about the actor's professional and personal successes and failures.  There are the movies that brought delight to millions, and those that were not well-received.  There are the multiple marriages, and his love for his children.  We also hear about his heartbreaking final years, as he battled substance abuse, depression, and a potential misdiagnosis of Parkinson's Disease which may actually have been a case of Lewy body dementia, which was discovered after his death.

Itzkoff is clearly a fan of Williams, which he acknowledges at the end of the book.  Every potential negative about Williams is framed in the best possible light, and the reader can decide if they would interpret all of the stories in the same way.  However, what comes out in the end is a comprehensive and fond look at a brilliant mind who is deeply missed.  This is a must-read book for any Robin Williams fan who wants to know more about this comic genius. 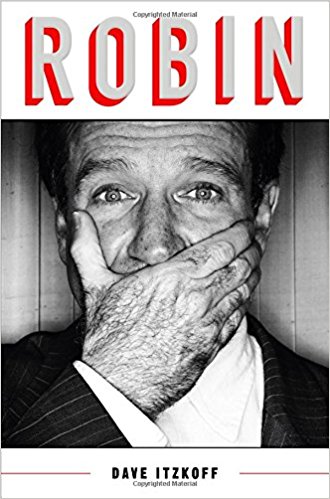 A fond look at a brilliant and lonely man.  (pic via amazon.com)