Our country seems to be getting crazier by the hour, and it is clear that things are in need of a major adjustment.  It just so happens that Adjustment Day  is the title of Chuck Palahniuk's new book (out on May 1.)  However, rather than calm things down, Palahniuk takes the reader on a disturbing ride where everything is even more insane, and the comedy is as dark as a black hole.

The Fight Club author's first novel in four years tells the story of the disintegration of the United States under the guise of freedom from the oppression of multiculturalism.  In other words, it's every libertarian's dream come true.  Politicians are about to start World War III as a preemptive measure to keep this country's young men from overthrowing the government.  However, those same young men beat the corrupt officials to the punch.  They're following the instructions from Adjustment Day, a mysterious book that seems to appear out of nowhere, featuring the teachings of a new "leader" named Talbott Reynolds.

Reynolds' book calls for the removal of the country's least popular people (as determined by an online vote, of course), and for the blending of cultures to be dissolved so that no group will still be held subject to the "unfair" expectations of others.  By dividing the formerly-United States into thirds (one white, one black, one gay and lesbian), everybody will supposedly be able to achieve their "true destiny."  The entire thing is personal identity politics taken to the extreme, but it feels like it takes place only two or three years from now.  For example, look at these two quotes from the mysterious Reynolds:

"The world wants a unified field theory.  A single thing, one something that explains everything.   Give it to them."

"The joy of fiction is that it only needs to smell true."

Palahniuk spares no one, as he attacks the media, academics, politicians, male insecurities, and religions.  He even manages to make fun of himself several times.  Throw in a healthy dose of conspiracy theory, and what you've got is an engrossing story that will leave you shaking your head, laughing in spots, and wondering how we reached a point where a satire like this dystopian nightmare doesn't feel far removed from current reality.  The ending falls a bit short of the expectations created by the first 2/3rds of the book, but it's still an entertaining read. 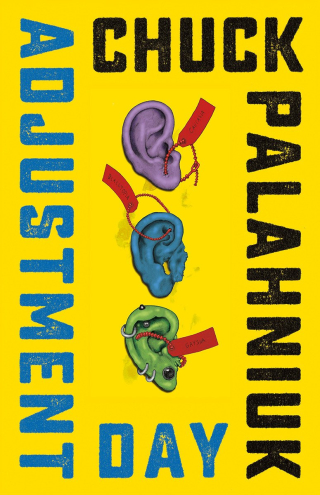 You don't want to lose an ear on Adjustment Day.  (pic via Amazon.com)