Bob Tewksbury was a substitute teacher for a day at my elementary school in a small New Hampshire town in the winter of 1982-1983.  The school was abuzz with the news that the sub teaching 6th grade was a minor league baseball pitcher for the New York Yankees. Yes, we were excited, even though he played for the dreaded Yankees.  Our teachers, aware of our distraction, told us we had to focus for the rest of the day, and then we could ask Tewksbury for autographs after school ended.

There was a long line of students standing outside the classroom, as the pitcher sat at his desk, handing us autographs that he wrote out on a pad of yellow lined paper.  I stuck my slip of paper in between two baseball cards in one of my albums for protection, in case Tewksbury ever made it to the big leagues.  I still have the albums, but I've forgotten which one has the autograph.  Looks like it will be safe for the long haul.

Meanwhile, Bob Tewksbury did make it to the majors.  He had a 13-year career with six teams and was an All Star in 1992 while pitching for the St. Louis Cardinals.  After retiring, he got his master's degree in sport psychology and counseling from Boston University and became a mental skills coach, first for the Boston Red Sox before moving onto the San Francisco Giants.  He's also the author (along with Scott Miller) of a new book called Ninety Percent Mental: An All-Star Player Turned Mental Skills Coach Reveals the Hidden Game of Baseball.

As the title suggests, Ninety Percent is an insider's perspective on the barrage of mental challenges that professional baseball players face at every step of their careers. It also provides some insight into what exactly it means to be a mental skills coach.  Tewksbury takes the reader through his own career progression (sadly, the substitute teacher gig is not mentioned.)  He explains the general battles with insecurities and anxieties typically faced by players who are trying to make it to, and stay in, the big leagues.

There's also discussion of what's involved in putting together a game plan that includes both the thought process behind throwing an individual pitch, as well as the constant challenges of staying in a productive head space during an outing.  Tewksbury had to deal with the fact that he didn't throw hard (topping out in the mid-80's), so he had to rely on strategy and control to succeed.  The former pitcher is able to lay all of this out in a way that is both straightforward and exhausting, which makes it easier to appreciate the value of a mental skills coach.  Professional baseball players are all talented athletes who have tremendous physical skills, but working on the mental component is new for many of them.  Ninety Percent Mental includes a number of testimonies from stars like Jon Lester, Anthony Rizzo, and Andrew Miller talking about the value of their work with Tewskbury in this area, and their results speak for themselves.

There's also some discussion about the evolution of the acceptance of mental skills work within Major League Baseball in the last 30 years.  Much like diet and training were discounted in the past, focusing on psychological strategies were once similarly overlooked.  However, with so much riding on a player's performance (both for that individual and the team), why wouldn't they do whatever they could to maximize their chances of success?  Clubs are now increasingly valuing the importance of these concepts, a trend which should only increase moving forward.

Ninety Percent Mental is not framed as a self-help book.  However, there's no reason that "regular people" can't apply the concepts Tewskbury outlines to their own lives.  Keeping one's breathing steady and mind focused on the immediate task, eliminating negative thinking, and using visualizations and positive affirmations, is productive behavior for everyone, even if we're not trying to strike out a slugger with the bases loaded.

Ninety Percent Mental delivers on its title.  Baseball fans will gain insight into the mental side of the game, and they will walk away with an even greater appreciation for what these athletes go through in their drive for success. 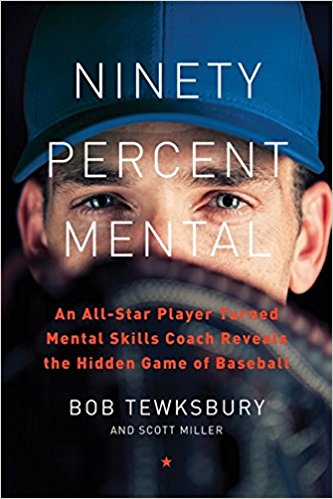 An inside look at another side of baseball.  (pic via amazon.com)