Three Billboards Outside Ebbing Missouri is a chaotic, violent, funny, angry, heart-wrenching movie.  It's also slightly insane, which makes it an apt film for today's world.

Frances McDormand stars as Mildred Hayes, a mother still mourning the brutal rape and murder of her teenage daughter Angela.  Seven months have passed, and no arrests have been made.  Hayes acts on her frustration by putting up messages on, you guessed it, three billboards, calling out Sheriff Bill Willoughby, played by Woody Harrelson.  Sheriff Willoughby is a well-meaning man who is battling his own challenges.  One of his professional responsibilities is managing racist officer Jason Dixon, played by Sam Rockwell.

You could not ask for better casting for these three roles.  McDormand is a force of nature who owns her character within the first five minutes of the movie.  She is a machine, slicing through her opponents with an amazing relentlessness.  For every lob other characters send her way, she smashes the return down their throats and then makes them eat the racket for good measure.  Harrelson is solid as Willoughby, bringing much more of a fundamental decency to the role than one might have expected going by the trailer.  Rockwell completes the trio with his manic presentation of Dixon.  All three of them should be remembered, come reward season.  They are surrounded by a terrific supporting cast who combines to bring a variety of emotions to the story, and they all deliver the goods. 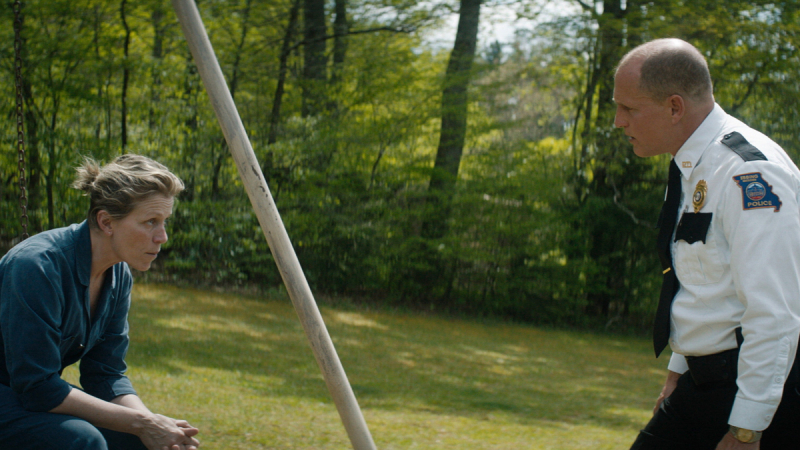 A face-off you won't forget.  (pic via npr.org)

The script (from Martin McDonagh, who also directed the movie) is razor sharp and hits its marks every time.  The pain is palpable, the anger is fierce, and the humor is as black as the midnight sky.  The need for vengeance is clear, but we also see the beginning of the roads to forgiveness and redemption.  There are many parts throughout the film where McDonagh and company could have chosen the "safe" option, and they never take it, which makes the story all the more interesting. All of this is accompanied by a pitch-perfect score from Carter Burwell.  Three Billboards grabs the viewer right from the opening credits and does not let go until the final scene fades out.

Three Billboards Outside Ebbing Missouri is not the intriguing quirky comedy the trailer would have you believe.  It's much more than that.  A must-see.