I hope you're all having a great July 4th weekend so far.  I'm off to see Mom Clutter, so I need to finish packing, and then I have to sit BDH and Little Buddha down for a talk about proper behavior while I'm gone.  I know, they look innocent, but looks can be deceiving.  These two can get into all sorts of trouble in Clutter Headquarters without supervision!

So, before I get back to that, let's take a moment on this patriotic weekend to celebrate one of the greatest Americans of all time.  A man who has single-handedly saved us from many foreign enemies time and time again.   A man who will fight for the rights of every man.  A man who feels strong about right and wrong.  A man who don't take trouble for very long.  Yes, my friends, a "Real American," the one, the only, the immortal Hulk Hogan:

Of course, it wouldn't be Clutter if I didn't point out that "Real American" was not originally written for Hulk Hogan.  It was supposed to be the theme song for a tag team called "The U.S. Express," which consisted of wrestlers Barry Windham and Mike Rotunda.   Hulk's theme song, also off of The Wrestling Album, was originally supposed to be this generic little number:

However, the U.S. Express broke up (I think Barry Windham had a contract dispute with the WWF), and Hulk Hogan was more than happy to swipe "Real American" for himself.  I think we can all agree that worked out for the best. 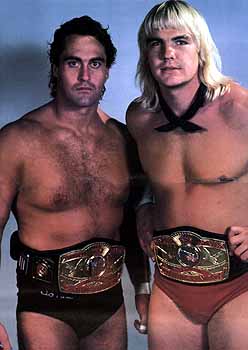 (Mike Rotunda and Barry Windham could have been real American heroes.)

Let's just take one more look at all of the sacrifices Hulk Hogan has made over the years for each of his Hulkamaniacs.  Sure, "Train, say your prayers, and eat your vitamins" actually meant, "lift and eat steroids like they're candy," but there's still a lesson to be learned from his exploits.  The next time someone has you down and almost out, just start shaking uncontrollably, wag your finger, drop a "Leg Drop of Doom" on them, and you'll be sure to come out on top. (Bonus points if you do all of that to a song by Creed.)

On that note, it's time for me to talk to the two troublemakers.  I hope you're all having a great day, and we'll see you back here for more fun soon.  Later!