Baby is the best getaway driver in town.  Give him his classic iPod so he can listen to music while he's at work, and no one can touch him.  He does what he thinks is his last job for a local mob boss named Doc, and then he meets a beautiful woman named Debora.  Everything is finally coming together for Baby, until it's not.  Fasten your seat belts, Baby Driver is the summer's best ride. 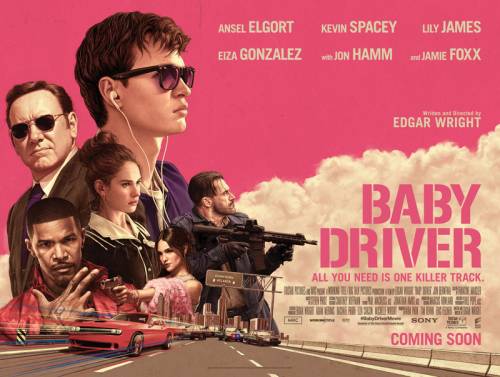 Buckle up.  (pic via showcasecinemas.co.uk)

Written and directed by Edgar Wright (Shaun of the Dead, Hot Fuzz, Scott Pilgrim vs. the World), Baby Driver is a smart and stylish music video which also happens to be a heist movie.  Due to an incident when he was a child, Baby always wears his iPod when he's at work.  Wright uses the music that Baby's listening to as the audio for every bank heist he's involved with, but the rest of the movie also moves to the same rhythms of the songs, right down to the gun shots and sirens.

The brilliant playlist includes songs by James Brown, Dave Brubeck, T. Rex, Martha & the Vandellas,  Issac Hayes, Queen, Young MC, Barry White, and many more.  It's a great collection which keeps the movie popping, particularly during the car chase scenes, which are amazing (and were done by stunt drivers, not with special effects.)  Your feet will be tapping throughout the movie.  Wright's heavy use of music brings comparisons to Quentin Tarantino.

Baby Driver features strong performances by the entire cast.  Baby is played by Ansel Elgort (The Fault in our Stars.)  He doesn't have a lot of dialogue, but he brings a real swagger to his role as the driver, and you can instantly feel his connection to Debora (played by Lily James.)  Debora has her own confidence as the diner waitress looking to get on the road and head out of town, never looking back while the music plays.  Kevin Spacey brings an edge to Doc.  It feels like the first time in ages that Spacey's been in a movie worthy of his talent, and he rises to the occasion.

The most interesting performance might be from Jamie Foxx, who plays one of the bank robbers named Bats.  Foxx brings a real menacing air to the role, and it's easy to believe something bad is just about to happen every time he's on the screen.  The most surprising turn is from Jon Hamm, who plays another robber named Buddy.  Hamm loses just about any trace of Don Draper and shows the he can also bring a threatening presence to the screen.  Eiza Gonzalez plays Darling, Buddy's wife, and she can also go dark with one wrong look.

Baby Driver feels like a movie you could have watched at the local drive-in in the 1950's.  The plot is fairly straightforward, but the music, adrenaline-fueled car chases, and solid performances across the board by the cast, will keep you entertained from start to finish.  It's a fun reason to get out of the sun for a couple of hours.  Buy yourself some popcorn and enjoy the ride.