Clutter Goes to the Movies: Logan

It's, in theory, a comic book movie.  However, you don't need to know much, if anything, about the X-Men to appreciate the story.

It's a movie with a strong message about tolerance.  We should be respecting each other's differences, not seeing them as "mistakes."  We are all people, not "things."

It's an exceptionally gory action movie.  This time, there's no sugar-coating the fact that anyone who loses a fight against the Wolverine is also probably going to lose a limb or their head.  The violence is brutal, and the language is coarse right out of the gate.  This is a movie that earns its R rating.

It's a classic Western featuring the grizzled hero facing down mortality.

Most surprisingly, it's also a compassionate look at the challenges of parenthood, whether it's taking care of an elderly parent or a child.  For a movie that is so hard-edged and rough in many ways (again, multiple heads are lost here), Logan has a moving soft side.  It's hard to think of another film that pulls off this balancing act so well.

The movie is set in 2029, and it's a bleak landscape.  Mutants have apparently been gone for a generation, and it doesn't sound like they met happy endings.  Logan is now a broken-down man who works as a limo driver, and his once nearly-indestructible body is finally breaking down on him.  He's taking care of Professor Charles Xavier, who is going senile.  Xavier's health problems cause him to have violent seizures, which is a serious danger to the world, given his mental capabilities.  Logan is approached by a woman to take care of a young girl named Laura, who has special powers of her own.  Of course there are bad guys after Laura, so it falls on Logan and Professor Xavier to keep her safe.

We'll leave the rest to you to see for yourself.  Hugh Jackman is magnificent in this movie.  It's his ninth time playing the character, and it's hard to believe there was ever any question about whether he was the right choice for the role.  Again, you don't have to know the backstory ahead of time to see the pain and weariness permeating Logan's bones, and more importantly filling his heart.  You can feel every one of the scars that cover his body. 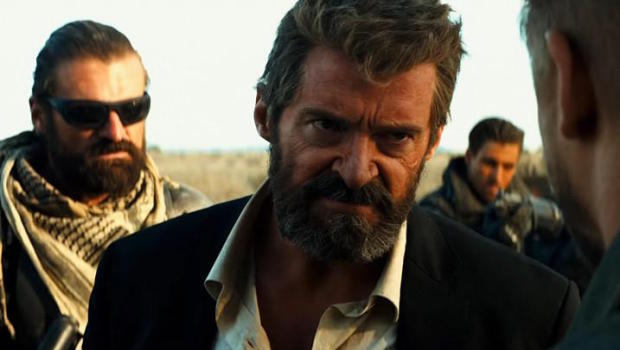 He may be getting older, but you still don't want to be on Logan's bad side.  (pic via cbsnews.com)

Sir Patrick Stewart is also terrific as usual.  There are moments where he brings the viewer a glimpse into the Xavier of old, the most brilliant mind on the planet, but Stewart also conveys the fear, pain, and confusion of an elderly man.  A man who is losing his once-formidable grip on reality, which in this case, makes him a potential weapon of mass destruction.

Newcomer Dafne Keen holds up her end of this story as well, and her character seems to significantly grow as the movie progresses.  It would be easy to see a role for her in any "next generation" X-Men movies.

Given the near-universally positive reviews, we went into the theater expecting to like Logan.  Honestly, we didn't know we would love it.  Hugh Jackman's Wolverine is given a fitting farewell.  This a great movie which we dare say is a must-see.  It's also the strongest movie we've seen about family in years which ironically is utterly inappropriate for children.  Logan deserves consideration for the 2018 Oscars.  Oh, and the final shot of the movie?  Breathtaking.