Welcome back!  How are you?  Who's ready for one last day of February?  I know it's missing a few days, but this month always seems to fly by.  I had the chance to do about 10 minutes of yard work yesterday.  It was mostly just cleaning up along the driveway, but it was nice.  I love that it looks like winter is wrapping up, though I'm a little concerned about how this early warm weather is going to impact the garden this year.  Anyway, we'll deal with that later.  There's a fresh pot of coffee ready to go, so help yourself to a nice medium DD, and let's clear out some Tuesday Clutter.

How concerned should Boston Red Sox fans be about Hanley Ramirez's sore right shoulder? A productive Ramirez is a key component of this year's offense, particularly as the team looks to find ways to replace David Ortiz's power.

After a slightly rough start, it sounds like Blake Swihart is getting back into the swing of things behind the plate. The guess here is that he starts the season in AAA, so he'd still have more time to work on his mechanics anyway, but it would be good to see him locked in at one position this year.

We all know Donald Trump lies on a daily basis, but he also occasionally makes some insanely stupid comments as well.  While talking to a group of U.S. governors yesterday, Trump said, "Now, I have to tell you, it's an unbelievably complex subject," he added. "Nobody knew health care could be so complicated."  Who didn't know it was so complicated?  It's not like the country's been debating the topic for almost a decade now.  Even his most loyal/uninformed constituents know it's a complicated issue.  How do these things come out of his mouth?

Back on the usual dishonesty front, Trump's claims about his upcoming budget proposal are worth about the same as a degree from Trump University.

As dishonest as the whole thing is, Trump's budget puts him on a path towards a collision with Speaker Paul Ryan, whose obsession with cutting safety net programs is well-documented.  This should be an interesting fight to watch.  Will Ryan try standing up to Trump for the first time since he became the Republican presidential nominee last year, or will he roll over once again as he and his colleagues have been doing since Trump took control of the GOP?  Of course, either way, the real losers here will be average Americans, as the Republicans continue their war on 99% of the country. 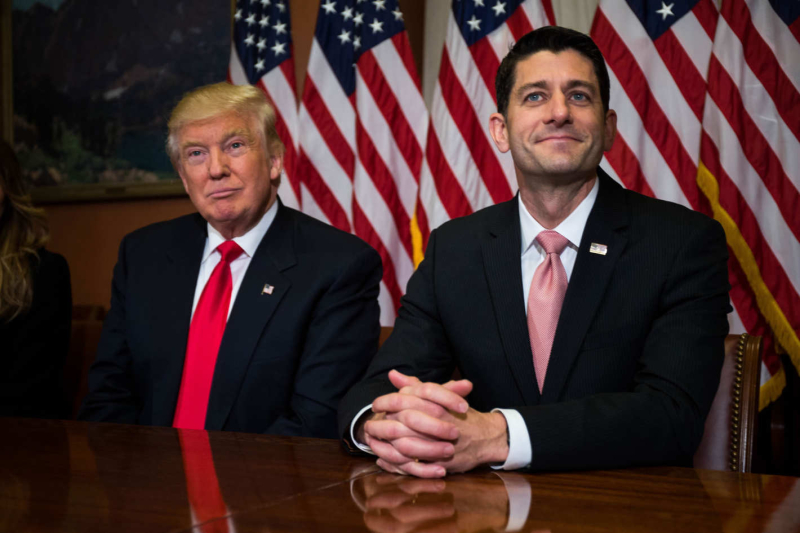 Who will blink first?  (pic via nymag.com)

A new wave of bomb threats was made against Jewish community centers/schools in 11 states yesterday. That's what happens when you elect the KKK's favorite candidate for president.  This is the real terrorist danger in this country, and it's what the federal government should be focusing on instead of trying to keep as many dark-skinned people out of the United States as possible.

David Bernstein has an interesting look at Maine Senator Susan Collins. She may have made headlines with a few anti-Trump votes and comments, but Bernstein gives a more complete view of her political decisions.

Subway tries to sound like they're the "healthy" fast-food option, but a new study shows that just 50% of the chicken in their sandwiches is, you know, chicken.  That's just nasty.  Wonder how their competitors' sandwiches would do in the same test.

The more we think about it, the more the controversy around the ending of the Oscars feels like a scam.  A false finish in the main event of the evening?  That's straight out of the WWE playbook.  The producers generated a huge buzz, and ratings will likely be much higher than usual in 2018, as people tune in to see if anything like that happens again.  Someone should check the credits and see if Vince McMahon was listed as a creative consultant this year.

Will Smith apparently has a new movie being released on Netflix in December.  Will you go out of your way to see it?  We'll probably check it out since we can always move on to something else if it's no good.  It's hard to remember the last movie of Smith's that we were excited about.

Okay kids, that's going to do it for now.  Let's have David Bowie and David Gilmour close things out for us as they team up on the Pink Floyd classic, "Comfortably Numb," for today's, "Song of the Day."

Thanks for stopping by, everyone. It was great to see you, as always.  Enjoy the rest of your day, be good, and we'll see you again at some point in March.  Until next time, that's today's Clearing out the Clutter, and we are outta here.