Clutter Goes to the Movies: Manchester by the Sea

I find January to be a challenging month.  It's hard to deal with the fact that my mom's birthday was January 1.  Sort of gets the new year off to a bumpy note.  Then there's the anniversary of her death on the 25th.  Frankly, I'm a little relieved when February 1 arrives.  However, the challenge has become more manageable as the years go by, and I think I'm certainly in a better head-space now than I have been in the last few years.

Of course, there's no better way to put that theory to the test than go with my dad to see Manchester By The Sea.  Casey Affleck stars as Lee Chandler, a man who is suddenly forced to step up when his older brother Joe (played by Kyle Chandler) suddenly dies, and Lee now needs to look after his nephew Patrick (played by Lucas Hedges.)  Lee Chandler is already dealing with his own personal tragedy when the movie begins, so let's be clear, the next 137 minutes aren't filled with slapstick humor.

I'll cut to the chase, this is an amazing movie.  It feels organic from start to finish.  The plot is how this story would play out in real life, and the conversations are the things people would say to each other under these conditions.  It has to be said, though, that about 3/4 of the story is in the silences in every scene.  They say far more than any dialogue that actors repeat to each other. 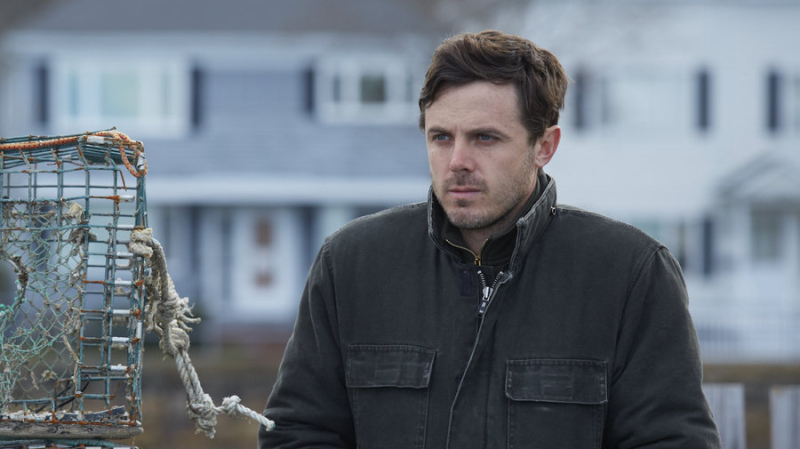 Casey Affleck's pain will hurt your heart.  (pic via npr.org)

You may already have guessed what drives Lee Chandler's heartbreak.  About six years have passed when the movie begins, and Casey Affleck is thoroughly amazing as a man who is a complete shell of who he used to be.  The pain on his face in every scene is soul-crushing.  Kyle Chandler is solid as Joe Chandler.  It feels like Joe and Lee have more of a father-son bond than that of brothers, and it feels legit.  Michelle Williams plays Lee's ex-wife Randi.  It's a small role, but again, everything about it feels real.  It would have been great to see more of her here.  Can't say I loved Lucas Hedges.  Patrick Chandler feels like a properly developed character, but Hedges sounds like Matt Damon in Good Will Hunting in every scene, and given that Damon was a producer on the film, that doesn't feel coincidental.

There's also one other negative about the casting.  One role was greatly miscast, and it's jarring.  There's also an important scene sequence where the music is both too loud and the wrong choice.  Both of these problems momentarily took me out of the story, but thankfully it was only for about three minutes in total.

Manchester by the Sea is an intense movie (though it has its dashes of dry humor sprinkled throughout.)  Understand that you're going to want to watch some Three Stooges or cartoons or something afterwards to restore some balance to your mood.  However, it's an honest story about life taking us in directions we don't expect and how we react to those changes. It's also about forgiveness, both of others and ourselves.   I'm not 100% sure I needed to see it in January, but if anything, that made the story easier to relate to.  It sounds like Casey Affleck is going to get some Oscar buzz for his performance, and it's well-deserved.  Know what you're getting into ahead of time, but besides that, go see this movie.

Now, if you'll excuse me, I need to go find some Three Stooges clips on YouTube.