I was watching the T.V. simulcast of the popular Toucher & Rich sports talk show as usual at the gym a few weeks ago.  (I need a distraction while I'm sitting on the exercise bike for 75 minutes.)  I don't remember the context anymore, but for some reason they were discussing the 1980's movie D.C. Cab, starring Mr. T., and Fred Toucher described the movie as "unwatchable," and he dared the audience to see for themselves.  Fast forward to one rainy Sunday morning, and challenge accepted.  Was Fred right?  Read on and see for yourself... 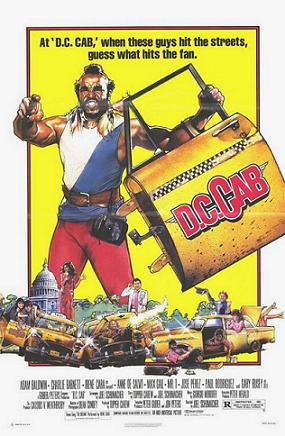 All I remembered about D.C. Cab (released in 1983) was that the cover of the video cassette prominently featured Mr. T., but that's it.  The plot goes something like this: Harold runs a ragtag taxi company, and he's one day surprised by the arrival of Albert, the son of a Vietnam veteran's friend of Harold.  Albert's dream is to be a cabbie and run a cab company, and he tries to turn Harold's crew into a professional company.  Of course, you have to watch the movie to see if he's successful, but that's the gist of it.

Seriously, that's the plot.  I know the T.V. show Taxi was big in the 1980's, but who bought a ticket to the film based on this story?  Guy's dream is to run a cab company?  Was there any chance this would have been made without Mr. T's involvement?  We all know cocaine use was rampant in the 198o's, and there's no way this was approved by someone who wasn't high.

My notes say at 1 minute and 15 seconds into it, I thought watching this movie might be a mistake, and maybe I should concede the point to Fred Toucher, but we pushed forward, despite dialogue like this during the opening credits:

Mr. T to a prostitute performing oral sex on a customer in his cab:  "Why don't you get a decent job?"

Prostitute: "Because I need the bread."

That pretty much set the tone for the next 90 minutes.

D.C. Cab was written by Joel Schumacher and produced by the 1980's powerhouse team of Jon Peters and Peter Guber, so it is slightly surprising that it's such a weak production, though it was early in all of their careers.  I wonder if it was a bet among themselves to see how ridiculous of a movie they could put together.  If that's the case, well done, gentlemen.  Well done.

One surprising thing about the movie is the cast.  It turns out that Mr. T. wasn't the only recognizable name in the movie.  We've also got Gary Busey, Bill Maher, Paul Rodriguez, Marsha Warfield, and Max Gail. I've blocked out much of the film in some sort of PTSD-type state, so let's go back to my notes for thoughts on a few of these characters:

Busey:  Drops a number of n-words, laughs hysterically for no reason throughout much of the film, looks like he forgot cameras were rolling during closing credits.  Definitely on something.

Maher:  Glassy eyes, definitely on something.  Moving out of acting was a good call.

Gail:  Probably should have stayed with Barney Miller.  Seemed to forget his lines at times.

Warfield and Anne De Salvo:  These are the two most prominent women in the cast (playing a cabbie and Gail's wife, respectively), and they're depressing and shrill.  Schumacher seems to have serious issues with women,

The biggest surprise of the whole thing might have been that Mr. T. wasn't the primary character (video cassette cover notwithstanding.)  The lead is Adam Baldwin, who plays Albert.  After watching the movie, I can't tell if I think that was a mistake or not.  Clearly T. was no great actor, but he must have been the biggest star in this cast at the time, and it's not evident that great acting chops were required by anyone connected to this gig.  Baldwin certainly had no charisma in this role.

I guess having T. be the inspirational leader would have been too much to ask for out of 1983.  Plus there's a romantic story-line as well, oh and that plot thread seems to involved Baldwin being involved with an underage minor, unless I missed something.  This structure also allows us to experience the moment when Mr. T. says Baldwin gave him his pride and dignity.  In addition to feeling racist, I'm also not sure when that was supposed to have happened.

The other notable thing about Mr. T. is that even though he's the biggest star, he's made to look small, given that he's shorter than Baldwin, and much less muscular than his fellow cabbies played by twins Peter and David Paul.  It's as if T's people didn't really put much thought into having him in this movie and just figured they should strike while the iron was hot, but that's can't be it, right?

What can I say, Fred Toucher was right.  There's no reason to watch this movie.  Nothing about it will keep your attention, and even if you happen to find it on the USA Network at 3:00 in the morning, or something.  You'll switch to the Happy Days reruns on channel 867 within five minutes.  One can only imagine how many drugs were involved in putting this mess together.

This adventure was an entirely-self-inflicted wound on my part, and it will likely be months before I find the strength to forgive myself for this misstep.  As it is, I'm slightly concerned that I've angered you by making you read more than 900 words on the subject.  How about we all agree to act like this never happened and go back to talking about the Red Sox and other more enjoyable topics, agreed?