Welcome back, and a happy Wednesday to you all!  Did you get the rain that we had here yesterday afternoon?  That was an impressive downpour.  I might not need to water the garden for the rest of the month.  There were a couple of times where it sounded like the thunder was directly over the Northern Estate, and I was wondering if I should be getting my affairs in order, but it all worked out.  Oh, the coffee is ready.  Help yourself to a nice medium DD, and let's clear out some Clutter!

The Boston Red Sox had a nice solid 9-1 win over the Cleveland Indians last night, with Sox starter Eduardo Rodriguez going eight innings.  Let's give a shout-out to rookie first baseman Travis Shaw, who had another multi-hit game with four singles.  Give Shaw credit, he is making this most of his opportunity this year.  He now has 23 hits in 22 games, including five home runs.  It's always fun to watch the kids show off their skills, and we wish him continue success for the rest of the season.  Joe Kelly takes the mound tonight as the Red Sox try to grab a series win against the Indians.  Clutter's confidence in Kelly is not what you would call "high," but the way this offense is going, he might be okay if he keeps Cleveland to fewer than nine runs.

However, the big news of the day took place off the field.  The Boston Red Sox hired Dave Dombrowski to be their new president of baseball operations.  This should be a game-changer for the Sox.  First off, he'll need a new GM, because Ben Cherington won't be sticking around.  Cherington did a magnificent job with the 2013 championship team, but this organization needs some significant improvement with its talent evaluation.  I'm sure it wouldn't be fair to pin that all on Cherington, given how involved the owners are, which brings me to the second point.  As a more experienced baseball executive, I'd expect Dombrowski to have greater independence from the ownership than Cherington did.  The guys who write the checks will clearly still be involved, but I think they made this move because they know they need a different approach moving forward, so it should be interesting to see how that plays out. 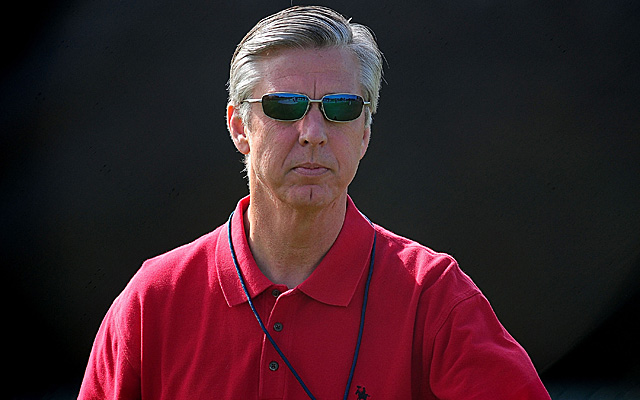 There's a new sheriff in town.  (pic via cbssports.com)

That also leaves the question of John Farrell's future.  Were he not currently battling cancer, one would expect that a new front office would immediately announce a new manager.  They certainly aren't going to do that now, but my guess is that Farrell won't be back for the 2016 season.  Perhaps he'll say he's taking a year off to focus on his health (and that might really be the case).  Who knows, maybe he will return next year because he's really not that bad of a manager.  He just needs a better roster.  I'd like to see him return, but I'd be surprised if it happened.  In any case, this should be a fascinating off-season to watch.

I went to the movies yesterday, partly to see Straight Outta Compton, the story about the rap group N.W.A., and partly because I really needed some time in the A/C.  I grew up as a middle class white guy from NH, and the first 15 minutes of the movie hammered home that there was nothing about the landscape these guys came from that I could relate to, and that alone was jarring.

I enjoyed the movie overall.  It does a great job of explaining where their music came from, and given the controversies over police violence these days, the band's song, "F--- tha Police" feels as relevant now as it did some 25 years ago.   In addition, the movie touches on a lot of universal themes regarding free speech, money, greed, violence in the pursuit of power, friendship and loss.

Having been old enough to be musically aware when the group came out, it seems generally accurate in as far as what they show onscreen, but there's certainly some whitewashing involved with issues like their misogyny and issues of violence against women.  As we say every time there's a history-based movie, it's not a documentary, so understand that you're not getting the whole story, but it's still important to hear what they are saying.  Kudos to the cast who all closely resemble their characters, especially Ice Cube's son O'Shea Jackson Jr., who plays his dad.  I give it an A-.

Actress Hayley Atwell would like to star in Doctor Who.  You know, I don't know who that is,  and I don't know how I feel about the idea of a female Doctor, which I find interesting.  I think I'm a pretty open-minded sort of fellow, but I'm not filled with excitement at this idea.  This will need some more thought.

Trevor Noah is ready to take over for Jon Stewart on The Daily Show on September 28.  Are we all ready for him to do it?  We'll work thr0ugh this together, Clutterheads!

Congratulations to Raffi Freedman-Gurspan, who became the first openly-transgender woman work at the White House.  I worked with Raffi a little bit in a past professional life, and it's exciting to have another Massachusetts connection to a historic step forward for equality for all in this country.

As if the GOP presidential candidates weren't distracted enough by front-runner Donald Trump's surge, four of them also have to deal with birther claims that they're ineligible for higher office.  The fun never ends with these guys.

The FDA approved a drug to improve a woman's libido.  Is this a step forward for women, or an unnecessary way for drug companies to make a profit?  What's your vote, Clutterheads?

NBCUniversal seems to be happy throwing their money around the Internet.  First they invested $200 million in Vox Media, and now they've thrown another $200 million at BuzzFeed.  That's fine with us.  Clutter enjoys our complete independence to say whatever we want without having to answer to anyone!

In case there was any confusion over this, the fact that Jared Fogle lost weight eating Subway sandwiches doesn't indicate that he's a good human being in any way.  The former company spokesman will apparently plead guilty to charges related to child pornography.

Okay kids, that's going to do it for now.  I feel like we should have the N.W.A. close things out for us today.  It's not the kind of thing we usually go with, and it would be good to shake things up a bit.  Here they are with, "F**k Tha Police," for today's, "Song of the Day."

Thanks for stopping by, everyone.  It was great to see you, as always.  Enjoy the rest of your day, be good, and we'll see you back here again for more fun and randomness soon.  Until next time, that's today's Clutter, and we are outta here.