Welcome back!  How are you?  We're not even going to discuss the weather today.  There's just no need for that.  Any big plans for the day?  Dad Clutter and I are going to the movies later this afternoon.  We're going to see a historical drama, I think it's called Hot Tub Time Machine 2.   Seriously, after the last batch of movies we've watched (including Wild, The Imitation Game, and American Sniper), we decided the next one had to some something silly as sort of a palate cleanser, and I think this will do the trick.  However, we've got work to do first, so help yourself to a nice medium DD, and let's clear out some Sunday Clutter.

It's hard to believe this weather is ever going to change,  but the Red Sox (except for David Ortiz and Allen Craig, wait, Craig has arrived, so we're all just waiting on Big Papi) are in Fort Myers, so spring can't be that far away.  As the team gets ready for a new season, the  Sox made it clear that John Farrell is still their guy, giving the manager a tw0-year contract extension yesterday that runs through 2018.  Farrell was a borderline lame-duck before this, since 2015 was the last guaranteed year of his contract, with a team option for 2016.  I think this will be okay.  2014 was a perfect storm of things going wrong for the Sox, and I expect them to be contenders again this year.

Hanley Ramirez seems to be trying his best to get off to a good start with his new/old team.  As far as his having never played left field before this year, I don't know, the Red Sox survived Manny Ramirez in that spot for years.  I just hope Hanley can stay healthy for a full year.

1)  The statement was offensive and is rightly being criticized, but given the racist attacks Republicans have made against Obama since day one, I'm sure Guliani just thought he was late to the party.  Even now, likely presidential candidate Wisconsin Governor Scott Walker can't bring himself to disavow the remarks.

2)  Guliani did a favor to slightly-less extreme candidates like Jeb Bush by drawing a line where Bush can appear more moderate by saying, "I'm conservative, but I'm not crazy like that guy."

Oh, and if you're looking for a scathing review of Rudy's own "greatest hits," you have to check out this op-ed by Wayne Barrett.

Yesterday marked the 50th anniversary of the assassination of Malcolm X.  I still remember how transfixed I was while reading his autobiography.  As a middle class white guy growing up in NH, it was a perspective on race relations and personal transformation that was unlike anything I had come across before.   Many of his criticisms still ring true today.   These comments from 1964 on police brutality sound like they could have been recorded yesterday:

Then there's this quote, which everyone should be mindful of on a daily basis: 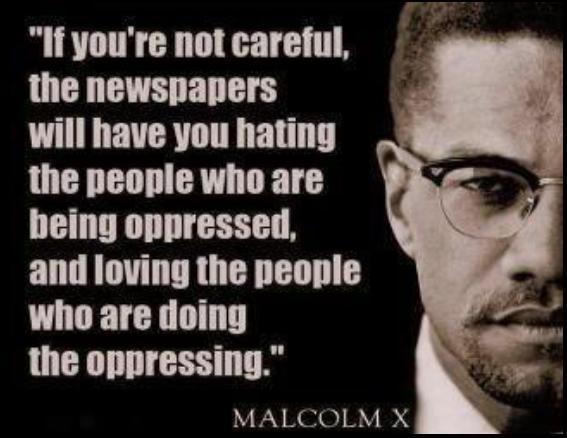 An eternal warning.  (pic via sodahead.com)

Cheers to actor Alan Cumming's video making fun of the FDA's restrictions on gay men donating blood.  It's time to make the policy much more inclusive.  I'd also like to put in a plug for revisiting the ban on donors who were potentially exposed to mad cow disease back in the 1990's.  I mean, come on, I think we'd mooooo know if I moooo had it by this mooo point, and I used to moooo be an all star donor moooo.

The final stretch of Mad Men begins on April 5th, and I'm not sure if the trailer tells us anything except that Jon Hamm is one good-looking dude, and the 1970's had some unfortunate fashion trends, but I'm pretty sure we already knew that.  What do you think, Clutterheads?  Is this some deep look at society?

So the Oscars are tonight, and while I enjoyed both Boyhood and Birdman, I'd have no problem giving the award for "Best Motion Picture" to Big Birdman, which packs a stronger emotional punch than the other two.  See for yourself:

Best wishes for a speedy recovery to Iron Maiden singer Bruce Dickinson who is recovering from a tumor on his tongue.  It sounds like he's expected to be back in action later this year.

Condolences to the family and friends of Harris Wittels, who died earlier this week.  I can't say I know much about the Parks & Recreation co-producer/stand-up comedian, but Aziz Ansari posted a sad tribute to his friend.

Cheers to Stephen Colbert, who is taking advantage of his hiatus before starting on The Late Show to grow a most outstanding beard.

I plead guilty to having watched the Two and a Half Men series finale.  I don't know, I was just too lazy to change the channel.  This review and I agree on one point:  it was one of the most meta finales ever.   Where we disagree is that I thought it was also one of the most smug and remarkably unpleasant shows I've ever seen.  I thought everyone came off as nasty and/or bitter.  I'm sure the show's creator Chuck Lorre has been drooling for years at the chance to launch such an extended attack against Charlie Sheen, but this was not fun to watch.

Okay kids, that's going to do it for now.  I think we'll let Bruce Dickinson and the rest of Iron Maiden close things out for us today.  Even if you don't particularly like the band (which is a mistake on your part), check out this clip of them playing the Rock in Rio festival.  Longtime Clutterheads know of my obsession with the dream of playing a stadium show like this, and these guys just have the crowd eating out of their hands.  I can't imagine what an adrenaline rush that must be.  See for yourself with this performance of "Run to to the Hills," for today's, "Song of the Day."

Thanks for stopping by, everyone.  It was great to see you, as always.  Enjoy the rest of your day, and we'll see you back here again for more fun soon.  Until next time, that's today's Clutter, and we are outta here.