The last three movies Dad Clutter and I have seen together are Wild, The Imitation Game, and now American Sniper.  I told him after we left the theater Saturday that the next one has to be something a little lighter, like maybe a Smurf movie or something.

American Sniper is the story of Chris Kyle, the most lethal sniper in U.S. military history, and it's based on his book of the same name.  It's not a documentary, so much as we said for the review of The Imitation Game, I recognize ahead of time that details may be missing/altered for the point of telling the story.  Having said that, Clint Eastwood and Bradley Cooper do a tremendous job of showing the incredible price that the members of our armed forces pay for their service.  The country asks an unreasonable amount of these men and women, and it comes with a heavy cost, whether it be death or not. 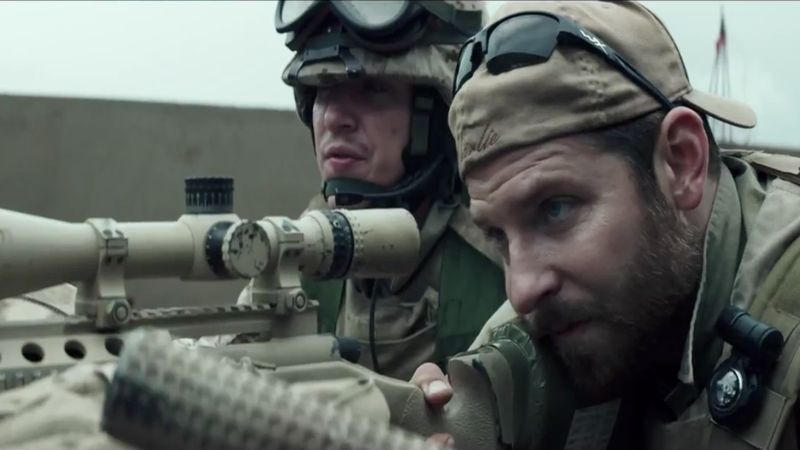 I had two concerns about this movie going into it.  The first was that I was really hoping it wouldn't feel like "war porn," which is what I thought of Mark Wahlberg's, Lone Survior.  That movie felt like it had little purpose other than to show an extended violent combat scene.  That's not the case with American Sniper.  Clint Eastwood gives us a decent sense of Kyle's childhood growing up in Texas in a religious household where his father saw the world divided up into "sheep, wolves, and sheepdogs," and it's clear that Kyle saw himself as a sheepdog protecting the flock.  We also learn enough about some of Kyle's fellow soldiers to have a vested interest in what happens to them.

The second concern, sort of tied to the first one, was whether or not Bradley Cooper had the acting chops to pull off this role.  I liked him in past movies like The Hangover, American Hustle, and Silver Linings Playbook, but those all strike me as slightly cartoonish roles, and I wasn't sure if he had the gravitas to really make this  work.  I'm happy to say he did a tremendous job.  First off, he physically transformed himself for the part, adding what had to have been at least 40 lbs of muscle for the role.  He was an intimidating presence on the screen.  Second, he toned it down from those past roles and conveyed Kyle's experience.  As the movie goes on, we see the toll that these battles have taken on Kyle, which Cooper delivers through gradual changes in both physically and emotionally.  This performance just earned Bradley Cooper an Oscar nomination for best actor, and it's deserved.

Chris Kyle had 160 confirmed kills, and his total number might have been over 250.  No movie could ever fully account for the burden that must have put on his shoulders.  He was called "The Legend," and at least in the movie, he shies away from the title, and you can see why.  Kyle comes across as an "America:  Love it or leave it" kind of guy, but no matter how strongly one has that mindset, the demons from personally killing so many men have to be extreme.

The movie is similar to The Hurt Locker, which did a great job of contrasting the extreme conditions of war with the mundane aspects of every day life back home.  Kyle becomes increasingly distant during his trips back to his family.  Putting his particular story aside, I don't know how any soldier who serves more than five minutes in a combat situation doesn't come back with PTSD.  You can be walking down the street talking to your friend, then he can be dead a minute later, and you're in a firefight for your life.  How do you make the switch from that to a family BBQ?  Speaking of firefights, there's a scene involving a sandstorm which might be one of the most harrowing visuals I've ever seen on a movie screen.

There have been some debates about whether or not this movie is "pro-war."  There's not much context to the combat scenes, and Kyle frequently refers to the opposition as "savages."  I'd argue that it doesn't take a position on the Iraq War, and that some critics are projecting Clint Eastwood's well-known personal political views onto this film.  I don't think it's pro or anti.  It's the story of a man trying to survive in a war.  My guess is that if this exact same film had been directed by Steven Spielberg (who was originally attached to the project), many of those same critics would consider American Sniper to be a compliment to Saving Private Ryan.

I only have two issues with American Sniper.  The first is that much of the movie involves a Syrian sniper named "Mustafa," and I'm unclear whether or not he's a made-up character or simply one that wasn't as large of a figure as he was portrayed in the movie.  Either way, if he wasn't really the key figure he's made out to be in the movie, then I think too much time was wasted on him.  There's enough to this story to not need that Hollywood addition.

Second, I think there was a missed opportunity with how the movie ended.  I won't go into spoilers for those who don't know, but it felt like more could have been said, because it ties into some of the central themes of the movie.  However, maybe the current legal proceedings prevented that from happening.