Clutter Goes to the Movies: The Imitation Game

Note:  It could be argued that there's a spoiler in the opening paragraph below.  I think it's a key part of the review, so I'm going to leave it in, but if you're bothered by such things, you might want to wait to read this until after you've seen the movie.  You have until the end of the next paragraph to figure out what you want to do here.  No pressure.

Also, before we get going, let's be clear about something.  While based on real events, no one is claming this is a documentary.  I'm sure that there were liberties taken with the story to make it a better movie.  As long as we acknowledge that, I'll say I don't particularly care about what's been changed.  The basic components are there, and this is still an important story.

Okay, if you're still reading at this point...Welcome to the next edition of "Clutter Goes to the Movies."

I wasn't really intending to write a review of The Imitation Game, but it's too good to pass up.  Clutter favorite Benedict Cumberbatch (who still has one of the greatest names ever) plays Alan Turing, a mathematician/cryptologist/computer pioneer/genius, who helped crack Germany's "Enigma" code which led to the shortening of World War II.  Turing was also prosecuted for being a gay man in England and eventually committed suicide.  Add to that the fact that (at least judging by the movie,) he was seemingly somewhere on the autism spectrum, and what you've got is an engrossing story about the pain of being "different," as well as a celebration of being able to see what others can not. 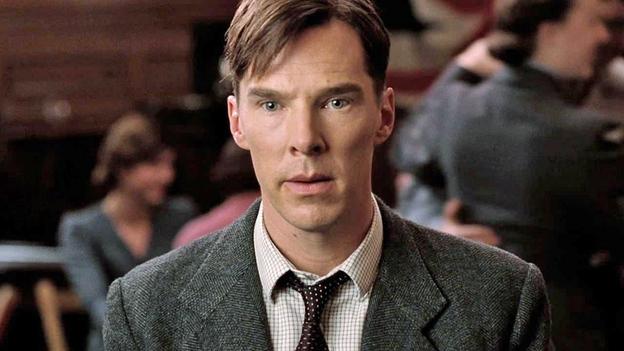 Keira Knightley co-stars as a woman named Joan Clarke, who was part of Turing's team.  I've never been a particularly big fan of Knightley, but she does a wonderful job here.  Clarke, much like Turig, is an outsider in this story, and it's fun to watch her stake her claim and show that she belongs.  She also has great chemistry with Benedict Cumberbatch.  There's humor, awkward tenderness and mutual respect  between the two characters.  It's love, really.

The movie does a pretty good job of showing the pressure that the team was under as the war raged on, and how impossible the idea of ever breaking the code seemed, though I found myself slightly surprised by just how exciting the "eureka" moment was...Let's work through that for a moment...

It's hard to see Cumberbatch in a role where he's the smartest man in the room, and not compare that to his portrayal of Sherlock Holmes.  In some ways, I wonder if it would be more of a stretch for him to just play a simple man of average intelligence at some point.  Having said that, what he brings so convincingly to Turing, in addition to the socially challenging brilliance, is a real sense of feeling lost.  Between his intellect and need to hide his sexual identity, Turing clearly feels like he doesn't belong in this world.

He knows he's not good with people.  He seems utterly baffled by them, and Cumberbatch shows the pain and helplessness he feels around it, as he tries to relate to his colleagues.  Turig has math, his support from Joan, and his undying faith in his machine.  That's the trio that keeps him going in this world that's so alien to him.

Perhaps that's why the "eureka" scene works so well.  It's Turing's validation when the approach that only he could see finally pay off.  It's exciting to know that this means the Nazis have just taken a major hit.  It's more rewarding to see Turig's personal win.

You want the movie to end there.  You want it to have a "Hollywood ending" and be able to just admire a genius for cracking this code and pretty much inventing computers.  Let grand music play as the credits roll.  Sadly, that's not where the story finishes.  Turing is prosecuted for being gay, for being different, instead of rightfully celebrated as a war hero.  That feeling of being an outsider in the world is as strong as ever for Turing, though it's that same difference which allowed him to achieve such great things.

It's time for the world to know his story, and that's the true legacy of The Imitation Game.