Welcome back!  The Xfinity Wifi connection still seems to be working at the Northern Estate, so I thought I'd say hi.  As far as I can tell, no one has hacked into my finances yet, so here's hoping that streak continues.  Before we go any further, everyone say "Happy Birthday!" to Dad Clutter, who I'm sure is reading this.  Ready?  Here we go..."HAPPY BIRTHDAY!!!!!" I'm sure he appreciates that very much.  Okay, the coffee is ready, so let's get to work.  Help yourself to a nice medium DD, and let's clear out some Monday Clutter.

It was great to watch the New England Patriots beat the Buffalo Bills 37-22 yesterday after a particularly strong second half with about 300 yards of total offense.  That win improved Tom Brady's lifetime record against the Bills to 23-2.  That's not bad.  It was a victory that came at a price though, with linebacker Jerrod Mayo, running back Stevan Ridley and center Dan Connolly all being hurt.  We don't know the extent of the injuries, but it doesn't sound good.  Adding to the concern is that the Patriots now have to immediately turn around and get ready for a Thursday night game.  Fortunately, that game is against the disaster that is this year's New York Jets. 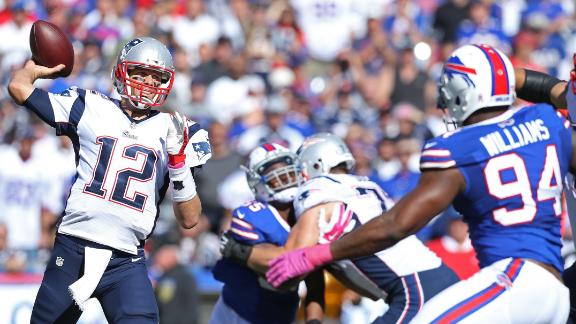 There was a report yesterday that Massachusetts might have its first Ebola patient, but apparently that's not the case.  I guess I can go back to Clutter Headquarters on schedule now.

Marriage equality made its way to Alaska after a federal judge overturned the state's same-sex marriage ban on Sunday.  I'm sure Sarah Palin will have a well-thought-out response to this historic development in her state, so that's something to look forward to.  Alaska Governor Sean Parnell said the state will appeal, but you still have time to swing over to the right side of history, governor.

Wisconsin Governor Scott Walker must be in real trouble in his re-election campaign if he's suddenly trying to pass himself off as pro-choice despite a lengthy record that says the exact opposite.  Pesky thing, that documented record

I don't know what to do with this video of John Cleese and Taylor Swift on The Graham Norton Show.  Cleese clearly doesn't care for Swift for some reason (for which I'm inclined to give him points), but then he attacks the looks of her cat for no obvious reason, makes a fairly nasty crack about women (which seems directed at Swift) and then finally criticizes dogs, which is so not cool in this neck of the woods.  (I can hear BDH all the way in Clutter Headquarters wondering what the hell his problem is.)  We'll have to discuss this when Cleese comes to Boston for his book-signing next month,

It sounds like Bill Hader's return to Saturday Night Live was a success.  What did you think of it, Clutterheads?  By the way, have you seen Skeleton Twins yet?

Okay kids, that's going to do it for now.  In honor of Dad Clutter's birthday, let's have the Beatles close things out for us with today's, "Song of the Day."

Thanks for stopping by, everyone.  It was great to see you, as always.  I'll be out back for a while raking leaves, so you're welcome to come hang out some more and help me with that.  Otherwise, be good, and we'll meet up again for more fun soon.  Until next time, that's today's Clearing out the Clutter, and we are outta here.